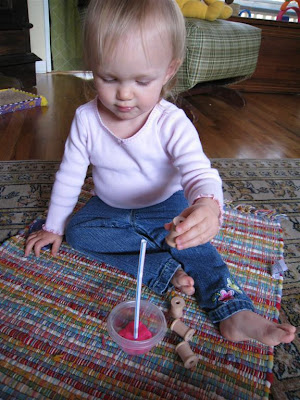 For this activity I put a small amount of playdoh in a bowl to hold up the straw. Then I showed O how to put the spools on the straw. She was very anxious to try it herself, and she liked the activity a little bit. It would have worked better if I'd had clay to hold the straw because the playdoh didn't hold it very well. I may also use packing styrofoam (from our recent Montessori purchases) to hold the straw up next time we do this activity. After O realized that the pink stuff in the bowl was playdoh, she was much more interested in playing with it instead of putting the spools on the straw :)