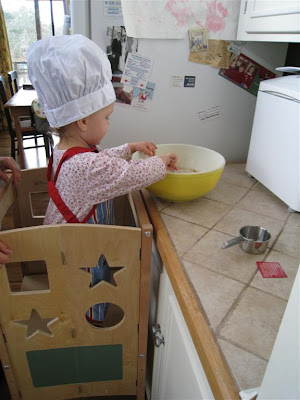 O's Guh-guh and Grandpa gave her a Kitchen Helper for Christmas, and I think its going to be another item that we use every day for years and years. We had a great time today using it while we baked cookies. O was at the counter with us participating every step of the way!

We've had a few problems with the kitchen helper so far. When I first put it together I realized that it was missing 4 screws. I called the company, and they told it would be a few weeks before they could send me the screws because the kitchen helper was out of stock. That was last week. Yesterday UPS dropped off a brand new Kitchen Helper. I was shocked! I expected them to mail me 4 screws not a new KH! While putting this one together I realized that it was also missing a piece, so I called to company today to let them know that this KH was not complete either. Their customer service department is great, but obviously they do not check these things too well before they ship them out. Dh was able to take a part off of the 1st KH to make the 2nd one complete, so we were able to use it today. Another issue with the KH is that the openings on the side make it very tempting for a toddler to climb up the side. O put her feet in the holes and was ready to climb, but we quickly stopped her and she hasn't done it again. I hope this won't be a problem. Even with these problems, I think the KH is a great addition to our household, and I am looking forward to using it every day. It will enable us to include O safely in so many more activities. I am looking forward to having her help me bake bread and cook supper on a regular basis. She'll also be able to have lots of fun having water play in the kitchen sink, and she'll be able to easily and safely help us unload the top rack of the dishwasher (she always wants to do this, but it was a little scary to put her in a chair so she could reach). Thanks Guh-guh and Grandpa for this great present!

Email ThisBlogThis!Share to TwitterShare to FacebookShare to Pinterest
Labels: the little helper