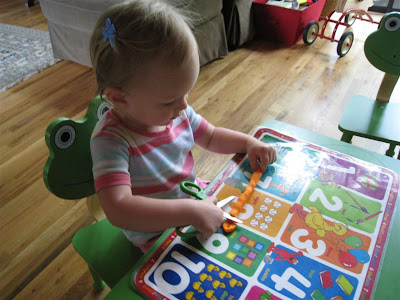 This week's unplugged theme is scissors. At first I thought O might be a little too young for scissors (21 months), but then I decided to give it a try. Elliott bought a pair of child safe scissors last night on his way home from work (Thanks, Elliott!), and O was very excited when she saw them this morning. I rolled out a playdoh snake and showed her how to cut it. She was excited and said "O, O,O" which is what she says when she's ready for her turn. We rolled a snake for her, and I handed her the scissors. She had a great time pressing them into the playdoh and trying to maneuver them. We have a LONG way to go before she is proficient with scissors, and I'm glad that we started now. We had a great time!

Email ThisBlogThis!Share to TwitterShare to FacebookShare to Pinterest
Labels: unplugged