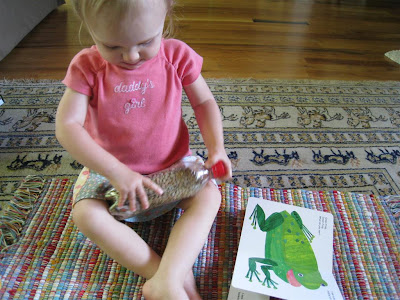 I made an I Spy bottle for O to go along with the book Brown Bear, Brown Bear What Do You See? I got the idea from here. Thanks Shannon for the link to that site. Its full of great ideas! I used lentils instead of rice since O already has a rice I Spy bottle. For this activity we read the book and after we read each page we look for the animal on that page. I kept saying "Green frog, green frog. Where are you?" O wasn't too interested at first (she just wanted to shake and open the bottle), but she became more interested as a I called to the animals asking where they were.