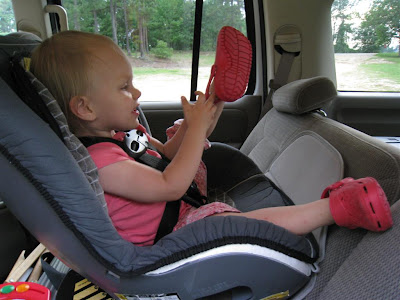 At 22 months old and about 26 pounds, O's car seat is STILL in the rear facing position. We've recieved lots of disbelieving looks and raised eyebrows over this, but Elliott and I both feel strongly that rear facing is the safest position. I've always planned on keeping O rear facing until she reached the maximum height and weight for her car seat, and Elliott was finally convinced after watching this video. I was excited to read in Parents magazine that the recommendation is changing to encourage parents to keep their children rear facing for as long as possible instead of turning them forwards at 1 year or 22 pounds. Yay! We aren't neurotically overprotective parents after all (well, maybe just a little bit!).
Posted by Melissa at 3:11 PM

Email ThisBlogThis!Share to TwitterShare to FacebookShare to Pinterest
Labels: safety