O and I made peanut butter playdough this afternoon. It was fun and very messy! There are lots of recipes on the internet, so I finally chose one and modified it a bit.

I used 1 cup of peanut butter (at the last minute I decided not to waste my yummy, organic peanut butter and used the cheap stuff that we used for the pine cone bird feeders a few months ago), 1 cup of dry milk, and a tablespoon of honey. Next time I will add more honey because our playdough was quite crumbly, and honey should help it to stick better. 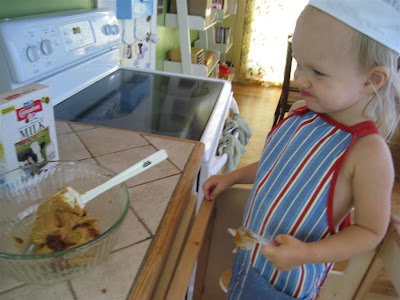 O helped mix the peanut butter and honey. She tasted the honey and wasn't terribly impressed. We talked about the concepts of sweet and sour. She said the honey was sour, so we'll have to work on those concepts more :) 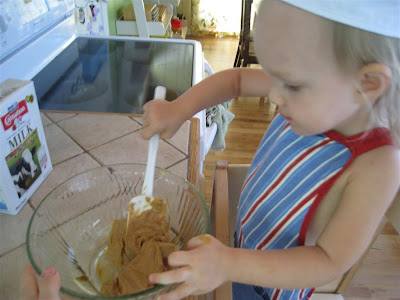 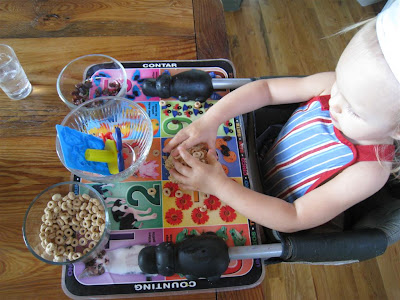 She's having fun with the playdough! We had a bowl of cheerios and a bowl of raisins to use for decoration. She ate the raisins like they were candy (not that she ever eats candy!). I think I'll have to give her raisins more often! We also had a bowl of playdough accessories. I made a bear and a snake, and O just had fun mashing it all around and sneaking bites while saying "O tastes." I put the pb playdough in the refrigerator to use again soon, and we'll definitely add more honey before we play with it again.
Posted by Melissa at 8:32 PM